Apparently, Aaron is moving to the other end of America. I'll miss his mischief most of all. I'll also miss receiving the directive "OK, you take that room and I'll take this room, and there will be no crossing over." whenever we bumped into each other at certain venues in which one might prefer to play the crowd unobserved by those who know your name. 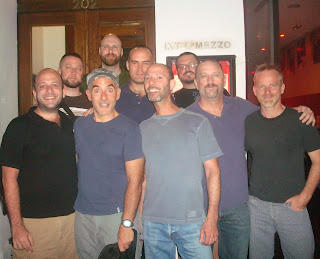 Thinking about Aaron's departure made me realize what a durable family we have become. Very few changes. There was Chris B's move to Texas, Eddie's mysterious seclusion in Philadelphia, and Mark's stone's-throwish move to Jersey, but other than that, the line-up has remained rather constant over the last four to five years, the passing of which has felt like five minutes.
Posted by Tony Adams at 9:31 PM

It was a lovely evening, but I am *VERY* unhappy.

Even though I now happily reside in New Jersey, I'm still here!