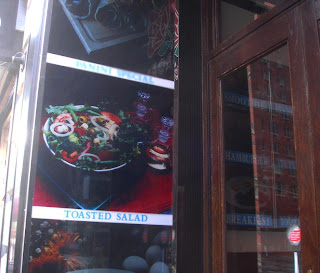 Email ThisBlogThis!Share to TwitterShare to FacebookShare to Pinterest
Labels: English as a second language

Tony are you on a run of eateries with poorly spelled menus? First it was the maynaise here in Boston, now it's toasted salad. Keep us posted with any new developments in the misspelled menu world.

New York has all the gastronomic delights we crave here in Chicago. I have pined for toasted lettuce for years, but the trend has failed to catch on outside of Gotham. Which is more culpable, the restaurant or the company printing the banner? Spell check wouldn't have caught this error, only the engaged eye. Wasn't it glaring enough to garner attention?

Michael Clark is bringing his Stravinsky show to the Lincoln Centre this June. It will sell out so get your tickets early. I'm gonna try and talk Darren into a wee trip to your city to see it again. Fingers crossed!
Dave
London Calling

I suppose it all depends on what the dressing consists of.

My favourite American Engrish past participle is 'axted,' as in 'She axted me a stupid question.' I have yet to see it in print, but here in New Jersey I hear it almost daily.

A Chinese restaurant near my first apartment listed "Fried Dumpings" on their menu. um ... no thanks. "Steamed dumpings" might have at least been a little funnier!

don't get me started. My poor son was in Hungarian schools until 5th grade - he got so frustrated with all the "exceptions", which outnumbered the rules. He was about to blow a gasket over:

through
though
cough
rough
bough
brought