Sol Lewitt for sale at Christie's on January 15th.

On January 15th, Christie's will offer our Sol Lewitt painting at auction. One of the benefits of consigning a piece like this to a major auction house is their ability to create some buzz about the piece. They know people. They have also assured me that our smallish Sol Lewitt, which may have originally been a study for his much larger paintings entitled "Squiggly Lines" (I saw them at his Whitney retrospective and also at the now defunct Ace Gallery in New York.) will be in the good company of a few other Sol Lewitts.

As I took it off the wall and swathed it in bubble wrap, I took one last moment to review what I had learned from it. A painting can be successful if it forces you to look twice at the way colors or shapes interact and cause a reaction in your brain. That's what made Sol Lewitt good. Though disarmingly simple, his images put the viewer in a pleasant stranglehold.

I put it in a large plastic bag from Bed Bath & Beyond. To avoid the rain, I brought it into a crowded subway at 66th Street for two short stops and wondered what a thief would think if he were to snatch it and get it home and unwrap it.

At Christie's receiving dock on 49th Street, no one fawns over what you bring in. A man in a glass booth puts aside a styrofoam coffee cup (I'd thought they would all drink from Limoges), and checks your paperwork. I signed something, and when I turned around to pick up the painting and officially hand it off (and to take back the very large and reusable BB&B plastic bag), it was already gone. Like a movie scene in which a too young mother gives up her baby which is whisked away from her before she can give it one last kiss.

For a decade we had lived with this painting. I fear we never really gave it the love it deserved. We bought it at a silent auction in the Wretched Little City. A benefit event involving a drag ball. Sol Lewitt was a generous and unpretentious man who made a habit of donating pieces for worthy causes. Only one other person in attendance knew its value and bid against us. We were delirious when the bidding closed and it was ours for very little.

There. I've done my part to help create some buzz. If any of you other bloggers feel inclined to wrestle with the notions of modern art, conceptual art, intellectual art, minimalism, traditional or representational art and want to lift this photo and use "Sol Lewitt" in your subject line, you'll increase our chances that some young trader looking to invest a bit of his year-end bonus may see it and do battle for it in January, and that will make us very happy. I know. I am shameless. 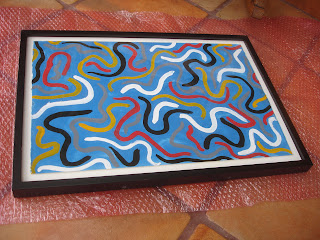 I'm not up for any wrestling, but far be it from me to turn down a request from a fellow blogger and friend.

now that i am back among the living, i shall post something tooting the horn of your squiggly line painting.

btw, i have wrestled with many things in my life, successfully and not so much, but going hand to hand with the concepts of all of whatever you said about art? ain't gonna happen.

i admire you for being able to let go of your (essentially stolen) treasure. i tend to hang on to mine in order to gloat. that's not an attractive thing, just reality.

The first time I read it, I thought it had been stolen while you were signing the paper. Remind me to make it a snippet next week.