For some reason, when I watch Jason Kidd, I think I understand the art and philosophy of basketball as practiced by a master. He makes what he does look effortless and lyrical. Not lumbering, like many other basketball players.

Tonight I am watching the Spurs-Mavericks play-off game. Jason Kidd demonstrates how even late in his career he has retooled some of his skills. He is now the greatest three-point shooter alive. On the court, he seems short and it's easy to forget that he is 6'4".

He was raised Catholic. I wonder if he still believes. 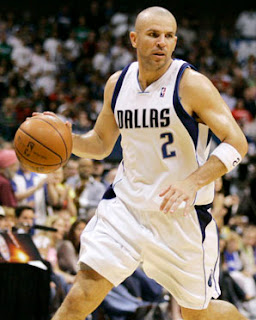 I was thinking of you when I was watching the game because of JK. I don't know who I'm rooting for...I'd like to see Shaq beat Kobe. That would be sweeeeeet!