More on the railyard proposals

Nicolai Ouroussoff, who appears to have become the Times' new Herbert Muschamp may not be up to the task, as is disclosed in his review of the five proposals for the railyard in today's paper. He wants to use words like urbanism and density in his evaluation of the five proposals, but he wields them simplistically, like a little girl spinning out romantic dialogue for her dolls. He's studied the concepts, but seems never to have really experienced them. He petulantly longs for originality in the proposals but does not suggest what form that might take.

Yesterday, C and I walked down to Grand Central to view the models of the five proposals and had our initial feelings confirmed: Brookfield Properties has made the best of the lot. Here is their articulate and intelligent Director of Development, Kate Collignon, fielding our questions.


While discussing the dismissable Ourossoff review with C, I ridiculed the way he (Ourossoff) wishes that the proposals related more strongly and imaginatively to the railyards that will continue to operate below the surface. I said, "What, does he want the grass replaced with glass?" C looked up from his coffee and said, "That might be nice." Anyway, we both love architectural models which have really evolved in recent years. So much more than balsa, these, lit-from-below models glowed and shimmered like quartz. If not for the fact that I have seen enough such elegant models translated into actual dreary buildings, I would be more easily taken in by their promise.

I suspect Mr. Ourossoff hasn't seen much of this type of development. Has probably never pushed a project through the development process, has probably never built anything of this scale (may have never even replaced a toilet in his apartment). I fear he is an academic, and is to urban architecture what a coffee table book of prints is to painting. Oh well. And for the record, yes, all five of these proposals could have been more imaginative, but the firms that comprised the assembled teams who made these pitches know full well that governments and entities with authority to permit or deny cannot stand too much imagination and originality. If you want the green light for a public project of this size, you need to dumb it down a bit. Here are some shots of the display models, including one that proposes a large outdoor movie screen on which is shown Julie Andrews as Maria (on perpetual loop?). 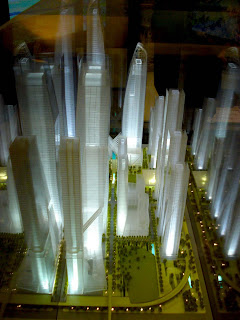 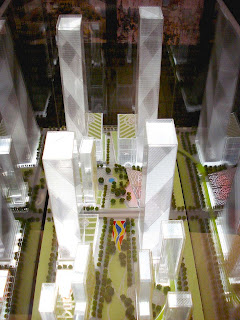 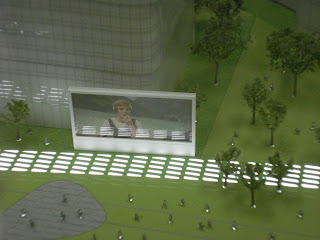 Boston is experiencing some serious development as well, though most of it is incredibly dreary.

My neighborhood is the Fenway has started a building boom on a section of Boylston Street that has been referred to many times as looking like Beirut after the war.

In theory, there is going to be some mixed income housing, though the way the regulations work in Boston, after 15 years the agreement ends and all the property can go to market rate.

An example is a building that was developed on Kilmarnock and Peterborough. It was mixed income for the requisite time and is now being converted into market rate condos.

It is wonderful that our big cities are being revitalized, however I wish it wasn't at the expense of middle and lower income people who have lived there whole lives in these cities and should be able to continue to live in and make urban life the rich mixture that first attracted me to the city.

Sadly, Boston at any rate, is turning into a suburban shopping mall and unfortunately, that is how our new and affluent citizens treat the place.