These two very white buildings have not much in common other than the color of their skin, and therefore, are illustrative of the fact that not all whites or blacks look alike.

The IAC building is new and situated in a sunny open area of Chelsea on the dry side of the Westside Highway where it meets 18th Street. You pass it on foot or on skates or bike and you feel its respiration: that of a jelly fish washed up onto sand at the beach, perhaps already dead but still glistening and inflated and quivering at high noon. You want to kick it. You want to tap it with a spoon as you would a molded Jello. The people inside it seem motionless, suspended in aspic.* 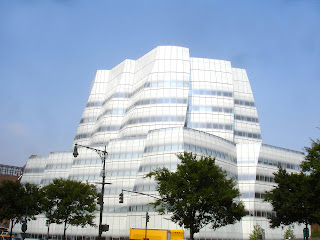 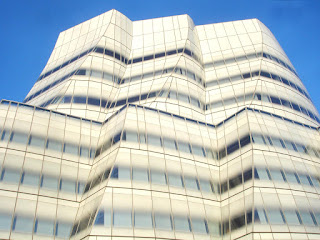 The Condict building is old and sandwiched between dour neighbors in the grimey shade of the jumble below Astor Place. You turn a corner at just the right time of day, and for a few brief minutes, the sun lights up its façade and you feel as if you have come across the corpse of a bride kidnapped at altar and thrown away between dumpsters in an alley. The elaborate finery has outlived its creator. Outlived its occupant. Outlived its celebration. You feel what you feel when you pass a Christmas tree tossed out on the curb in January with shivering tinsel still clinging to the branches.** 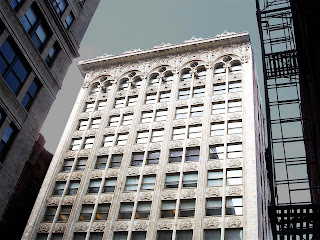 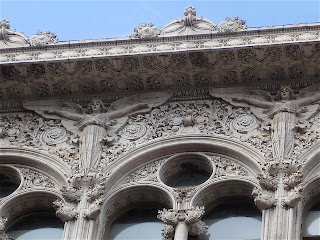 What is it that a building is supposed to do for us? At the very least, it should contain us with convenience. Both of these do that. At their best, buildings should tickle us, and should make convivial those places that had been nothing but the space between destinations. Both of these do that as well. I always anticipate seeing them as I approach their addresses.

Really, they have a lot in common. I love them equally, if that is possible.

*This is the headquarters of IAC, the holding company for Barry Diller’s internet ventures. It is the first freestanding structure to be designed and built in Manhattan by the architect Frank Gehry. While Diller did not get his wish to be able to view the Statue of Liberty from his desk, Gehry was able to provide him with that view from the private roof terrace accessed from Diller’s office. Unlike other well-known works by Gehry, it is not clad with metal scales, but with air-brushed milky glass. At night it is an entirely different spectacle.

**The Condict Building, a confection of lofts, was later called the Bayard Building. It is located at 65 Bleecker Street between Broadway and Bowery. It was built in 1897-99. Louis Sullivan was its architect.

From the AIA Guide to New York City :

“This was a radical building in its time, a direct confrontation with the architectural establishment that had embraced American Renaissance architecture after the Columbian Exposition (Chicago World’s Fair) of 1893. Sullivan, the principal philosopher and leading designer of the Chicago School (the antithesis of the American Renaissance), was the employer and teacher of Frank Lloyd Wright (who referred to him romantically as lieber Meister). The sextet of angels supporting the cornice was added at the request of his client, Silas Alden Condict. The building had little influence in New York for, as architectural historian Carl Condit wondered, ‘Who would expect an aesthetic experience on Bleecker Street?’”
Posted by Tony Adams at 3:30 PM

I don't like Barry Diller's Gehry palace. It reminds me of a building concept inspired by that plastic packaging certain products come in that cannot be opened except with scissors.

I like them both. Gehry's architecture is so sculptural, I find it engaging in a sensory manner, usually craving to run my hands over it. I like the embellishment of the Condict Building, it reminds me of a lacy old spinster and speaks to a grander time when ornamentation was important, and craftsman weren't so scarce. Both of them escape the ordinary IMHO, and I find that appealing in and of itself.

Don't forget this other new white elephant on Bowery; the New Museum for Contemporary Art opens on Dec. 1.

I'm getting a strong "The Fountainhead" flashback here. I'm going to go lie down.