When I first started writing stories, I would print out a section of something and trot across the dirt road from our house in Provincetown to Kelly's house where I would toss a few folded pages onto the driver's seat of her car. I don't know why I singled her out for the responsibility of being the taster who tells you if you've added too much salt to, or have undercooked something, but I did. Maybe I trusted her judgment. Maybe the sound of her glorious laughter from the far side of the high hedge always made me want to know what she had just heard. Made me put down the spade, leave my garden, and cross the road to her. Maybe it was the far away places in her clear blue eyes that seemed to hold open old photo albums, and to sit on the porch beside her was to be invited to slowly turn the pages of those albums and to find myself among the ghosts of a family we have all known too well and a home we have all shared and never left. She seemed to have had the nonsense burned out of her by whatever previous life had tossed her up onto these shores. I think we had that in common. She wasn't a goofy sitcom neighbor. She was simply wise and kind and fascinated with everything and everyone around her. And the thing that I do not understand is the fact that I always wanted to be sharper, funnier and more dazzling when I was with her, even though she was never judgmental or pontifical or demanding. It was just so much fun to delight her.

In those days, Luanne, her partner, was still living mostly In New Jersey where she had a career and two kids to raise. Having successfully discharged those responsibilities, she is now in Provincetown year round. They make a gorgeous couple, and to see them again after an absence of several years is grand. (Kelly is on the left in this photo.) 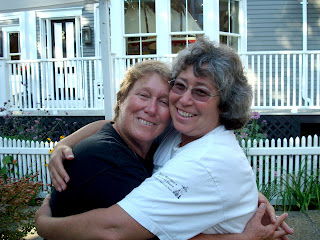 Kelly has written a book called Jack of Nine Tales. It is about her cat, Jack. I who am not at all a "cat person" love this cat. Jack would frequently saunter into my garden and leap up onto my shoulder to watch me grill a piece of salmon. Other times, he'd come over while I would have a book in my hand. He would collapse on the sunny stones of the patio next to my chair and stretch himself out with all paws in the air, as if to say, "I am bored. You got new?" Jack had charm and I often found myself talking to him, I am sorry to have to admit. I'd ask him where he had been and for details about what everyone else was doing. When I opened the sliders, he was in the house in a flash, and I knew that he was familiar with the interior of every other house in the vicinity and that it was probably a good thing that he could not talk.

Jack is still living with Kelly and Luanne. In addition to his book, there are "Jack" stuffed animals and a line of "Jack" accessories. 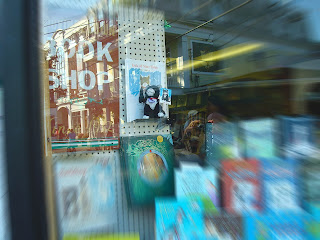 Some folks are fond of talking about the differences among LGBT people. About the differences between the gay men and lesbians who live in Provincetown. About who has control of the town today. About how the lesbians kept the place alive during the earliest years of the AIDS epidemic. About how the east end is for them and the west end is for us. These two beautiful, wonderful women prove that this is worthless chatter, and more than the sky and the sea and the wealth, Kelly and Luanne and Jack are what this town is all about, and why I still miss it.
Posted by Tony Adams at 1:57 PM

Email ThisBlogThis!Share to TwitterShare to FacebookShare to Pinterest
Labels: Provincetown

Sept 14: Some folks are fond of talking about the differences among LGBT people. These two women prove that this is worthless chatter.

Sept 5: I think that for a long time we have been afraid to admit that we gay men really don't have much in common with lesbians and trans people.

Wow. A 180 opinion change in 9 days. I think dimissing genuine political analysis of coalition and community by gay and LBT people as "worthless chatter" is surprising coming from someone who seems to have an open mind.

ps I hate to be rude, but I also found your bilerico column about the bathhouses to be bordering on Macaca racist -- using the doltish and naive Vietnamese character as a device merely to demonstrate your own sexual experiences thus presumed solidarity with the rest of the LBT bilerico readership seems beyond disingenous and has frankly soured me to someone I thought was a genuine noble seeker of the authentic.

The mark of a true friend is someone who makes you like who you are when you're with her. Kelly sounds delightful; no wonder you miss her and Luanne.

Dear Former Fan,
Sorry to have disappointed you. "Worthless chatter" was a mistake on my part.
Regarding the bilerico column, why do you describe the letter-writer as doltish? Just because English is challenging for him? Shame on you. Also, why do you assume I feel a need to express solidarity with any group? Perfect example of making assumptions and applying them to something that someone has written.

OMG! I meet Luanne this summer in P-town. She was selling photographs and we were looking for art for the house we are trying to buy in P-town. She told me the story of how she commuted for years to P-town to spend time with her partner. What a small world.

The ladies sound lovely, as does Jack. Much more lovely than "former fan" who describes you a "genuine noble seeker of the authentic".

His comparison between 9/5 and 9/14is specious at best; clearly each statement has little in common with the other. I'd pay it no mind.

Anyway, I've always thought of you as a seeker of the fantastic!

Lovely. Yet another reason to love that place.

Lovely Post. I have never experienced any problems with the gays vs the lesbians...Maybe it is where I live or who I know. We all seem to get along.

The idea that the mere fact of being gay makes us all one happy community of gay men and lesbians is naive. We know many gay folk with whom we wouldn't spend another moment and many straight folk who we count among our closest friends.