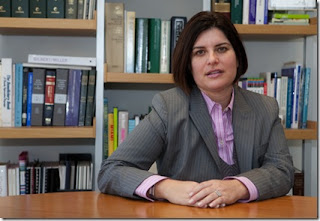 “I didn’t come out – even to myself – until after college. Sometimes when I come out to friends who knew me way back when, their reaction is ‘Oh we always knew you were a lesbian, but we never dreamed you’d be a lawyer!’”
The double L-worded Attorney Elizabeth Schwartz is a fascinating study in the twists and turns that life can bring even for someone as self-directed as she.
On March 26th, she was named an honoree for this year’s Women Worth Knowing of the Miami Beach Women’s Conference. In her acceptance speech about the rights of unmarried couples, she spoke of being appreciative that the honor highlighted her work for the LGBT community and that discrimination is not acceptable. The award is now seventeen years old and Attorney Schwartz is the only out lesbian to have won it in recent years.
Did she always want to be a lawyer?
(You can read the rest of my interview with Attorney Schwartz after the break or head over to the current issue of South Florida Gay News)
“I’m a Broward girl, born in Miami Beach but grew up in Hollywood. I went to Penn where I got very involved in civil rights issues like race relations, pro-choice and homelessness. I was the kind of activist student who would do things like staple wire coat hangers to trees with signs that said ‘This is not a surgical instrument.’ Philadelphia was just too cold for me. I lived in Israel for a while after college before I came back to Florida.”
How did the legal career come about?
“I went to a jazz festival in New Orleans where I had an epiphany. I suddenly realized that as a lawyer I could still do the social work that attracted me. So I decided to go to the best school in my backyard and that was UM. I think I got in the day before classes started. I had always been very engaged in LGBT issues. Even when I had a boyfriend in college I marched for LGBT rights. Thank God I ended up being a gay lawyer or I might have taken some vow of poverty and worked for legal aid!
“My original plan was to be a journalist. I had a column in my high school paper. It was called LizBiz. I pretty much had the run of the paper. When I went to Penn, I wanted to write for their paper.  The first thing I submitted was heavily edited and I was mortified! So instead of becoming a journalist, I married one!”
Attorney Schwartz and Lydia Martin who writes for the Miami Herald have been together for eight years.
“We are peers in life. We both had established ourselves in our careers. I think it is helpful if two people in a relationship are at the same point in life although I know that it doesn’t guarantee a successful relationship and there are plenty of examples to the contrary. I once had a relationship with a Starbucks barrista. I adored her and I still do. She was a person with great potential but it didn’t work out. We were at different places in life and they never met. Still, you never really know what makes a relationship work although when a couple comes into my office I can often tell immediately if the relationship will work or not.”
Attorney Schwartz calls her practice gay family law and she treats the law as a therapeutic profession.
“ The law had originally been a way to help people resolve conflict and close chapters that needed to be closed. Unfortunately, because of greed and shortsightedness on the part of both lawyers and clients, we moved away from that. I try to restore that in my practice. With my estate planning, I try to do that prophylactically. Sometimes it’s tough because I get a client who says ‘I want you to nail him/her to the wall!’ I try first to get those types into mediation.
“I firmly believe in the ‘hers/mine/ours’ arrangement. If a couple keeps everything jointly owned, it could cause resentments. On the other hand, if everything is separately owned, how is that a coupling? My idea of a good partnership is something that can grow together, with no bizarre power dynamics. Yes, I see a lot of bizarre power dynamics that cause problems in relationships.”
I wondered if men or women were more difficult clients in gay divorce.
“There’s no simple answer. In the gay community, we are harsher in divorce not because we are worse people but because we do not have the instruments of law to lean on. Straight people have the rule books. Sometimes I think what the gay community needs first and more important than gay marriage is gay divorce! That would solve many problems.
“A lot of times, gay men treat divorce as a business transaction. Women may be more emotional, but even as I say that I realize it is not a fair estimation. I am thinking of one male couple that had a terrible fight over which one was going to get the red Baccarat crystal Dorothy from Oz slippers!”
I suggested that they each should have kept one slipper.
“Look, I always tell my clients that I believe in the Belt and Suspenders Rule. Just because you are legally married in another state, don’t assume that your rights will be guaranteed here in Florida. Just because you had a good lawyer draw up wills and powers of attorney elsewhere, don’t assume they will work to your advantage in Florida. Get the protections you need drawn up specifically in the language of this state.”
Belt and Suspenders. Good advice that left this man who was married and well assisted by a very good lesbian lawyer in Connecticut wondering if he might need the additional help of the convincing Attorney Elizabeth Schwartz.
You may contact Attorney Elizabeth F. Schwartz at www.sobelaw.com
Posted by Tony Adams at 1:49 PM

It is refreshing to hear someone who cares about LGBT issues and immerses herself in the thick of it. The only thing i do not want to admit or agree with her on is that people who make it as a couple seem to be at the same station in life.