30 Years of ties and 3 weird suits

Why have I not thrown out a single tie since the early 1970s? Viewed together, they are like cross sections of rock understood by geologists as indicators of different eras, ice ages, cosmic disturbances, and fossilization. I present them here in no particular order. Some were gifts from friends and staff. Some were my own choice. I felt obligated to them all. Swatches of cloth whose only purpose in life was to be pretty. Some succeeded more than others. Some had seasons of attraction longer than others. One or two of them never once left the closet. Some of them served faithfully to cheer the dreary world of work. Some of them were stained with coffee and lunch. Even those, I did not have the heart to pitch. I would dab at them with a wet sponge, ruining the silk for harsh light. Off they all go now to Housing Works, where ironic young men will match them jauntily with denim and sneakers, in order to accent what they might say about Kafka or Beuys.

Not pictured are the ones I will keep. The more conservative Brooks Brothers rep ties of my recent years. The Valentino, Hermes and Longchamp foulard prints from Paris that are forever rich and classic. And, a certain hand-painted one from C.

Unrelatedly, I am also pitching three weird suits acquired in three separate moments of vacation induced madness. The one on the left is totally iridescent. The one in the center is entirely silk. All three have huge padded shoulders and have never once been worn. I can't imagine who might want them, but I once did, and if they soon end up in a landfill, I doubt that I will have accrued any bad karma.

As I say goodbye to thirty years of ties and three weird suits, I do not feel that I have learned much of a lesson about the spending, the sporting, the clinging, the looking and the strutting we all do. The lesson I do feel is the one about giving it up, putting down baggage, laying to rest the past and not looking back. Learning that the words about these things are more valuable and enduring than the things themselves. Still, I hope I never lose these photos. Every few years, I may want to click on them to feel their full humor and horror and to enter the memory that all those brightly colored workday nooses carry, of co-workers and meetings and promotions and tensions and coffee and major reports due tomorrow and demanding bosses and politics and the glorious grinding halt and now from far away a plastic bag stuffed with it all and set next to the door. Lucky, free me. 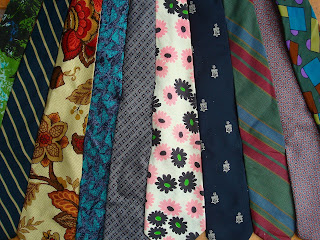 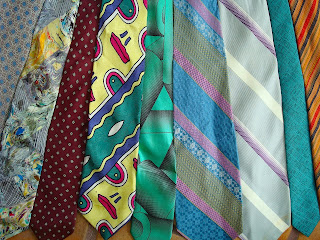 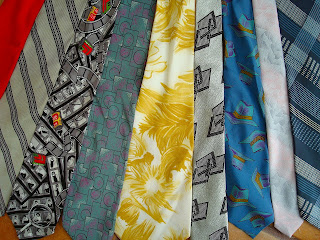 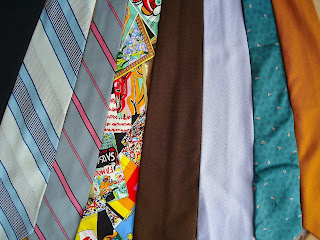 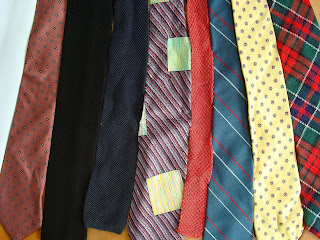 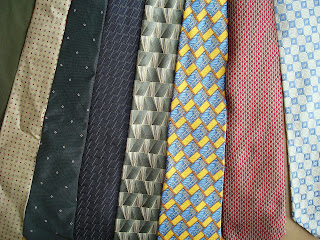 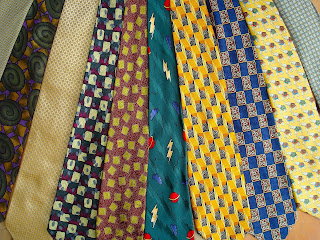 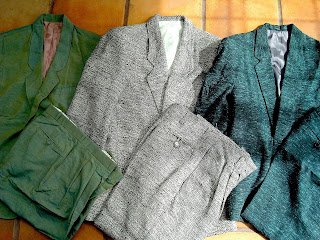 WOW well I hope someone will find them to their liking. Some of those ties scream attention.

Ooooo- dats a WHOLE lotta bad fashion to dump at one time!

I have seen beautiful quits made from sewing ties together. Your horde would make some seamstress very happy. But the suits, I agree, weird.

I much prefer you in a ruff rider t-shirt, faded jeans, and sensible black boots.

Sylvia, Those would make a quilt so loud one would hardly be able to sleep.

I have long felt that neckties are meant to be as you say simple decoration. They change width, acceptable patterns and even the wildest of ties can somehow be tamed if worn by the right person with the right suit.

Which brings us to those 3 suits. What could you have been thinking?

Sporting a bright and wild tie with a dark conservative suit is like wearing a Mona Lisa smile with a twinkle in your eye.

NYC is such a small town. I'm betting this won't be the last you see of at least part of your collection, Tony.

sage sent me and to nells garden..thanks to you...so thanks to you..
as a single mother my kids used to get me ties for fathers day..i think i have duplicates of some of your ties..

Dear Ashe,
I know. Kinda reminds me of the lyrics to Second Hand Rose:
Once while strolling
Through the Ritz a girl got my goat.
She nudged her friend
And said "Oh look there goes
My old fur coat."

Nobody does whatever one does better than you....

The suits look like vintage Guys n Doll attire. I'm thinking Frank Sinatra ish. I must say getting rid of the " tartan" I believe Royal Stewart which always looks nice for New Years Eve or Christmas will be plucked up quickly.
Don

I despise ties, but if I still wore them I'd be ringing your door. Quite a collection you have there.

I think the purple one with the yellow squares wins.

I just bought some that look just like some of those. Montreal is always a little behind NYC in the fashion department... ;)

Yikes! I have a few ties like the ones you pictured... and that's AFTER a major purge!

The quilt idea sounds nice though.